Just as food trucks have been a means towards establishing a storefront or brick and mortar restaurant (see: Filistix and Woodwork), I think pop-up restaurants have the same potential. It seems like ages ago now, but before RGE RD moved into their permanent digs, Chef Blair Lebsack hosted pop-up meals in the city and out on the farm (and even now, continues with the latter).

The Mirepoix Trio (made up of Chefs Rylan Krause, Jade Wu and Adam Zarycki) has been organizing special one-off vegan dinners in Edmonton since last summer. The functions not only let them collaborate and cook outside the box, but the meals have also allowed them to build a name for themselves and some money to boot – with the hope of one day establishing their own restaurant. 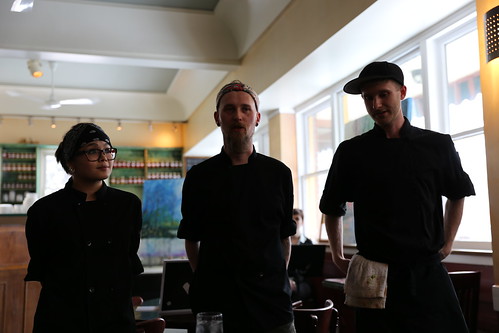 Based on their Easter weekend suppers, I think the Mirepoix Trio is gaining quite the following in this city. They had generously invited Mack and I to dine as their guests as an engagement present (so sweet). Held at Upper Crust on Good Friday, the five course meal would have only set us back a very reasonable $40.

We started off with some refreshing drinks – a Mirepoix soda (Limoncello, vodka, basil, mint agave and soda) and an Orange Blossom (sugar, orange biters, St. Germain and Prosecco). 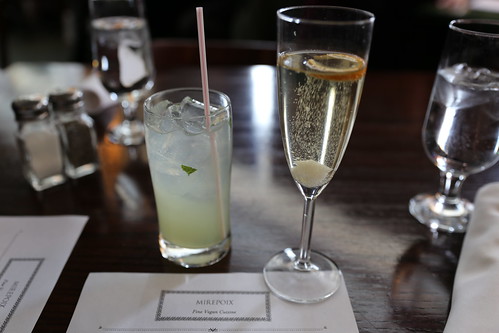 Kudos to the chefs for preceding each course with a personal explanation – it’s always great to see the people behind the food! It was also insightful to hear about their direction for the meal – to make sure each course would flow into the next, each dish would adopt an ingredient from the previous one, ensuring some continuity.

The first course was a straightforward but delicious mushrooms and toast, served with an underlay of fennel pesto. Those two bites packed a punch, and set the tone at the start for a meal all about simple comforts. 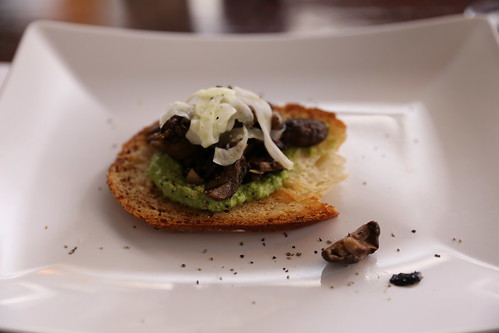 On that blustery, snowy day, nothing was more welcome than the tomato soup with grilled cheese croutons (the cheese in this instance was Daiya). I could have eaten more than a handful of those crispy croutons, but I did particularly appreciate the brightness that the roasted tomato drizzle lent the dish. 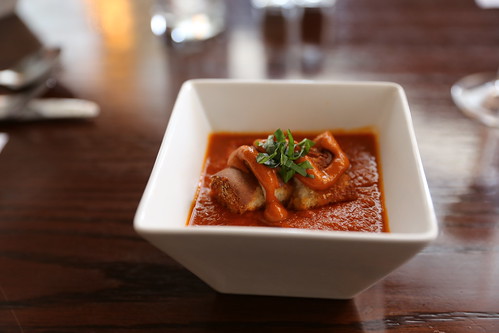 Mack found the palate-cleansing iced tomato granita a little strange, given the extreme temperature shift from the earlier dish, but being a fan of caprese salad, I enjoyed the combination of tomato, basil and creamy cashew cheese. 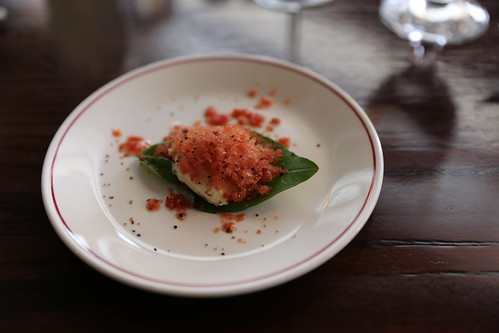 We were both looking forward to the potato gnocchi, to be served with a creamy cheese sauce. The gnocchi themselves lived up to expectation, plump, seasoned well and satisfying. However, the accompanying asparagus seemed out of place texturally; the spears didn’t hold up to roasting at all. 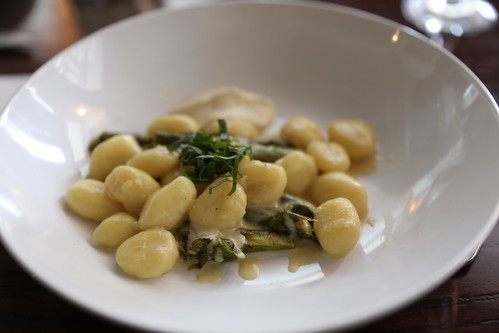 To end the night was Mirepoix’s take on a classic – strawberry shortcake. Here, the addition of basil tied it into the main, but what really made it sing was the sweet dollop of coconut whipped cream. I didn’t miss the dairy at all! 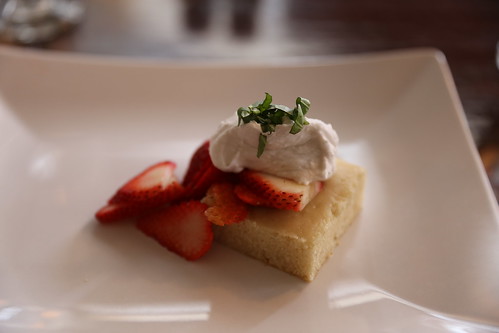 The meal was a great introduction to what the Mirepoix Trio is trying to do – elevate expectations of vegan cuisine, all within a scope of familiarity for those less accustomed to the possibilities of vegan cooking. It was clear Rylan, Jade and Adam are passionate about what they do – and given the growing niche of vegan establishments in Edmonton, I have no doubt a Mirepoix restaurant would help meet this need. Best of luck to them as they continue to raise their profile with these pop-up dinners! Follow them on Twitter to find out when their next event will be taking place.

After dinner, Mack and I walked over to The Princess Theatre to continue our evening with food on film. I had earmarked The Lunchbox during last year’s Edmonton International Film Festival, but due to time conflicts, I wasn’t able to watch it. Lucky for me, The Princess brought the film back to Edmonton.

It’s been some time since we’ve caught a film at The Princess, but this visit reminded us why we should be back more often – clean, intimate and retro, it was a much different experience than a trip to the typical multiplex. So much so that we indulged in popcorn, something we never do! 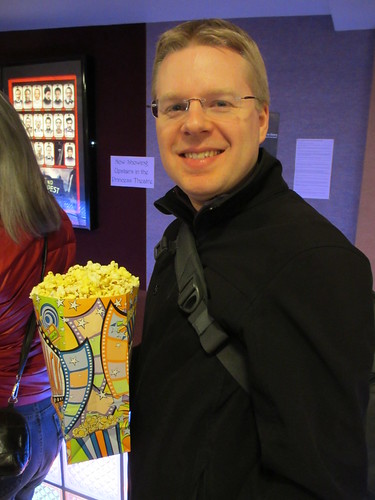 As for The Lunchbox – I highly recommend it, and not just for the food (even though the styling inspired immediate Indian cuisine cravings). My interest in the movie was initially to see the dabbawala food delivery system in action, but it is so much more than that. It’s a lovely story about the connection between two lonely people in bustling Mumbai, subtle and beautifully acted. Though The Lunchbox is no longer playing at The Princess, it’s now moved to Landmark City Centre, so you still have a chance to see it in theatres. Go, now!