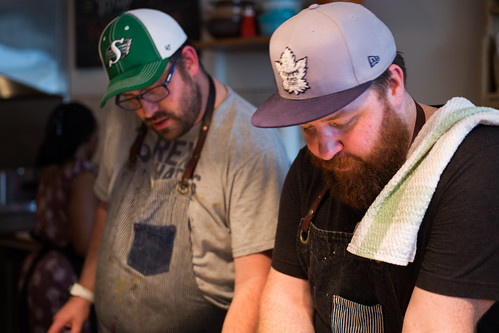 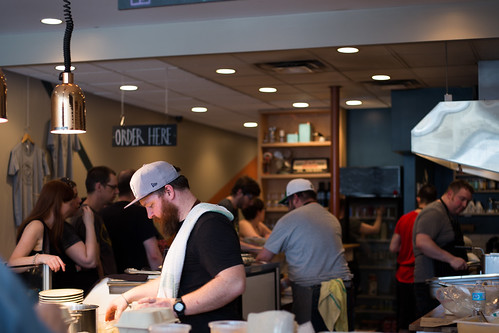 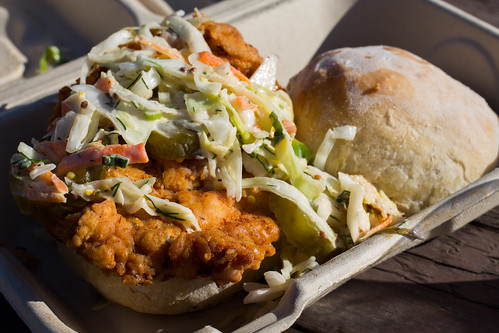 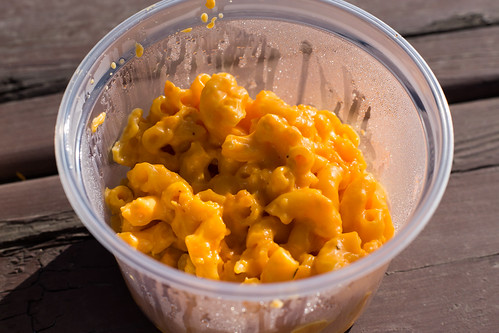 To celebrate the start of construction at their upcoming storefront in the McLeod Building, the folks behind Woodwork decided to throw a pop-up party in another historic location! Mack and I headed to the Rossdale Brewery last night for the festivities.

The event started at 8pm, and we were glad we decided to arrive early – it filled up fast! The $10 ticket entitled the bearer to a plate of Nomad’s specialties. The kitchen staff were working hard at dishing out the plates, though the distribution was a bit haphazard, given it was difficult for the wait staff to keep track of who had already been served.

Pork is no doubt Nomad’s strength, and we thoroughly enjoyed the pulled pork and accompanying roasted apples. The smoked salmon over cucumber was a dainty two-bite appetizer, and the pickled vegetables were a nice touch.

The Volstead Act were offering four mixed drink options. We chose to share a Blinker, featuring Bulleit Bourbon, grapefruit juice, and house-made preserves. The bourbon was prominent, but I appreciated the balance from the juice and berries.

It was great to catch up with some familiar faces, who are equally looking forward to what will be Downtown Edmonton’s newest restaurant. If you can’t wait, make sure you consider a membership to their Sunday Dinner club, which will grant you access to four private seasonally-inspired dinners, or peruse the Top Shelf program, where you can have your very own bottle to return to at the bar!

It sounds like the blank slate of the McLeod space will be a blessing to Woodwork’s owners, as they can design it to specification, but just in case, here’s hoping for expedient construction!