On July 11, 2015, What the Truck?! partnered with Northlands to co-host an event during Park After Dark. 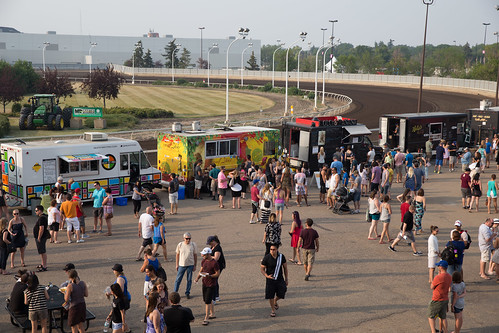 Park After Dark was established to introduce those who may not be familiar with the track to the excitement of live horse races. With an extensive outdoor patio and licensed area, we thought it would be a good way to incorporate an adjacent beer garden into What the Truck?!, something attendees have been inquiring about for some time. 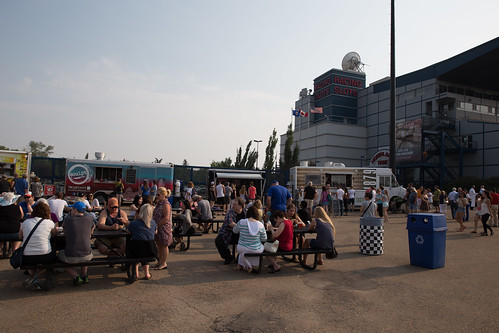 We hosted 15 trucks that night, including 5 new to the festival. 1879 Where the Flavour Begins, Northlands’ own food truck, made its debut at the event, and seemed to be a crowd favourite, incorporating product from Mojo Jojo Pickles into one of their dishes. Mack and I split a “Big Mock” burger from another new truck, The Hop, enjoying the quality of a homemade patty but a flavour inspired by the Golden Arches.

The space ended up being very conducive to a food truck event, with the backdrop of horse races creating an atmosphere of anticipation and exhilaration. It was neat to see folks crowd around the track at the bugle call to post throughout the evening. 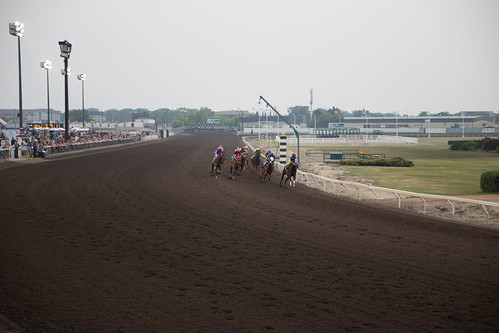 Linda Hoang even decided to introduce visitors to What the Truck?! in her Explore Edmonton video for Edmonton Tourism. Thanks, Linda!

If you missed our event at Park After Dark, you only have two other chances to catch What the Truck?! before the end of our 2015 season. Our penultimate event is another first for our festival – Trucks in the Outfield.

We’ll be lining up the trucks inside Telus Field so you’ll be able to have a picnic in the outfield! Attendees are encouraged to bring blankets and even baseball gloves and balls to play catch on the ball diamond.

Three trucks, The Hungry Dodo, Roots Patties, and Spiced! Food Truck, are new to What the Truck?!. All menus are now up for your viewing pleasure.

Hope to see you there!

Something Mack and I have wanted to do for ages in Edmonton is watch a live horse race. Though my only exposure to horse racing in general is watching the Triple Crown on television, we knew Northlands Park had a reputation for putting on a good show (and those tongue-in-cheek commercials with aptly named horses like getoffthecouch probably didn’t hurt either). Fortuitously, the Park was hosting a tweetup on a Friday night two weeks ago. We signed up through EventBrite and hoped for the best.

We rode the train over to Northlands (though I know it’s obvious, it would have been nice if transit was mentioned on the EventBrite ticket, instead of only listing the availability of free parking), and walked through some of the preliminary Capital Ex set-up on our way to the Park. Once there, we found quite a happening space.

In an effort to attract a younger demographic, and to de-mystify the aura around horse racing, Northlands transforms into what they bill as “Edmonton’s largest patio party” once a week in the summer. I was really amazed at what some cushy rattan furniture and a live DJ could do to transform the uninviting pavement into a sun-drenched lounge. The Park in the Dark series, which takes place every Friday through to September, also features a free shuttle to The Pint.

The entire patio is licensed (and also serves up a casual barbecue menu), but patrons of all ages are permitted. This translated into quite a diverse range of parties – from families with young children to the bar crowd to older couples. In many ways, Northlands has done a great job to make it a destination for almost everyone.

They even had a few hilarious bouncy ball races down the track between races, similar to the silly competitions hosted at other sporting events at half time.

In it to win it

Of course, part of the intention behind the tweetup was to teach those of us racing neophytes how to place bets. We had missed the initial group lesson (5:30pm was much too early to begin the formal program), but it actually worked out for the best. We were hooked up with a very knowledgeable and enthusiastic guide, who took some time to go through the rudimentary elements of a wager, as well as some of the statistics to look for (e.g., jockey’s record, horse’s lifetime record, horse’s record at Northlands Park). In the end though, he encouraged us to have fun with it – sometimes the best wagers are made on superficial elements like the names or colour of an animal (Cathy has a cheeky breakdown of more random betting schemes).

Justin was a good mentor!

All guests of the tweetup received a free $2 wager, but we were lucky enough to receive an additional $25. With that, we were able to play around quite a bit with the types of bets we made – from choosing a jockey with a winning streak that night and the horse with the best record to a horse with a memorable name (“Dream Nettie”, in our case, who reminded us of our Belua Designs creation). It was definitely hit or miss, but cheering for our horse to reach the post was made that much more exciting with money on the line!

Right in the action

At the end of the day, we made slightly more than what we wagered, which is all we could have hoped for our first time out – call it beginner’s luck!

Mack’s all smiles with his highest winning ticket

Thanks to Northlands for putting on a great tweetup, and for helping us get our feet wet in the world of horse racing!