Last year, my coworker’s husband worked for Edmonton Canoe over the summer, and it was from her that I first learned about an all-inclusive way to paddle down the North Saskatchewan from Devon and into the city. Mack and I have wanted to see the city from the river’s perspective for some time, and finally made plans to do so last weekend.

Edmonton Canoe is one of two local companies that provides bus transportation from Edmonton to Devon and at the boat launch, sets you up with a canoe or kayak. For the two of us, we paid $100 total.

We met the staff and the rest of the group we would be departing with at Emily Murphy Park. Full disclosure, we arrived a few minutes late, and thus missed the complete introduction from the staff member. Still, from what we gathered, it was fairly brief; she was pointing out the route on a two-sided map we would be given to guide us on our journey, along with a whistle we were told to use in case of emergency. They estimated the trip would take approximately 7-8 hours.

Before getting on the bus to Devon, we were “checked off” a list (I had pre-paid for the trip by phone), though we found it odd that they didn’t confirm our cell phone number or even note down the number of the canoe we were assigned. When we docked, we weren’t asked for our names; I’m not sure how they would have known who to look for in the event all parties weren’t accounted for by the end of the night. In some ways, this was emblematic of our experience – Edmonton Canoe seemed uninterested in anything beyond the basic provision of transportation and a canoe rental, even though there were many opportunities for them to make service less of an afterthought.

Although a map of our river course was provided to us on the bus, it was clear the document was more than ten years old. It definitely could have been more detailed, as some of the pedestrian bridges we passed under were not noted, and given the bus ride was 30 minutes in duration, there would have been enough time for either a verbal overview or to look over information about the landmarks we could watch for. 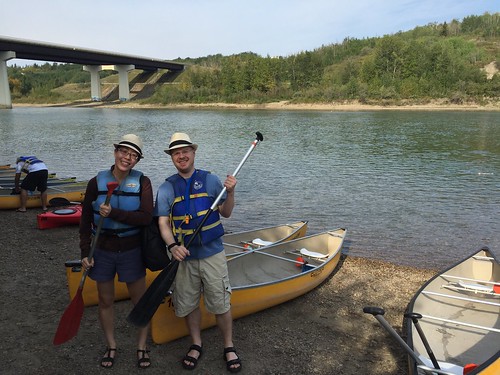 At the Devon boat launch, we had time to visit restrooms before we were fitted with lifejackets and pushed off in our vessel for the day. There were a few parties ahead of us, and a large group behind us, and though we all likely set off within about 20 minutes of each other, we eventually lost sight of everyone else. 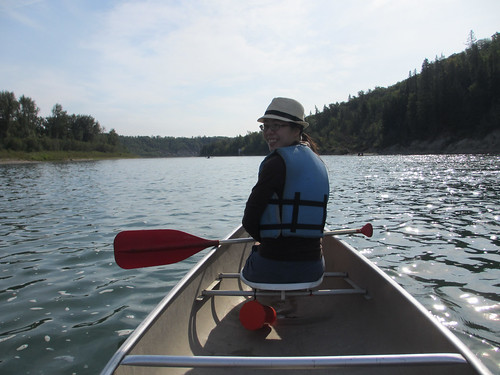 When we started our trip, the weather was more than cooperative. Sunny, clear and without much of a breeze, spending the day floating downstream seemed like it would be a pleasant experience. 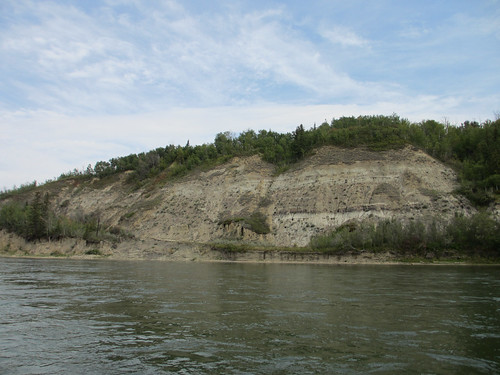 I had been most looking forward to getting into Edmonton, in order to observe our bridges from the water, but I actually found the Devon portion most peaceful and relaxing. Mack and I were both amazed at how shallow and clear the river was in places – only a few inches deep – and understood why some have encouraged more Edmontonians to utilize the river as a place to swim. We did observe a few small groups floating on dinghies, but most of the people by the water’s edge were dog owners, along Terwillegar and Laurier Parks. 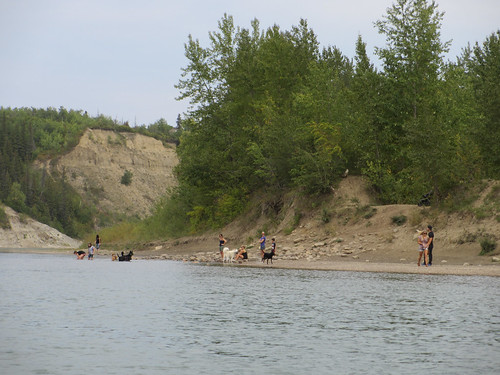 The highlight of the canoe trip was when we spotted a family of deer along the shore, just before the Anthony Henday Bridge. We’ve seen roadside wildlife before, but never riverside wildlife! 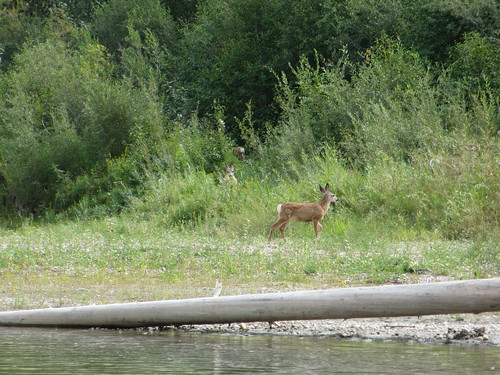 We ended up shoring up there to stop for lunch (which we had brought with us). Although the staff had pointed out a place called Big Island on the map, without any actual signage on the water, it was clear we had overshot it by that point. Mack commented that it would have been nice if some of the Edmonton Canoe staff had been waiting for us at Big Island to flag us down so we could have lunch as a group. 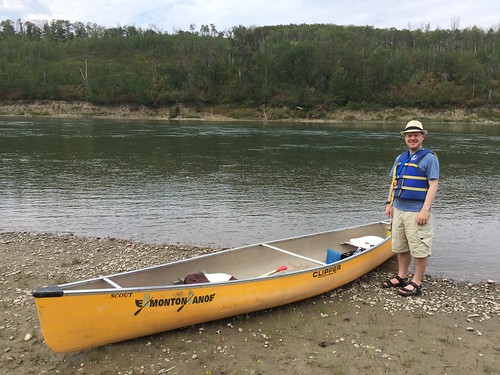 Mack at our lunch break 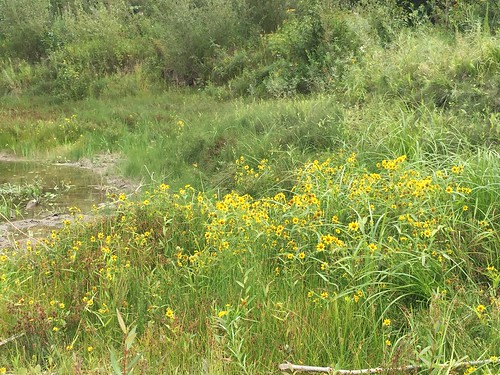 In the city, we made some discoveries, including Hawrelak Park/Buena Vista Park Pedestrian Bridge that we didn’t know existed. 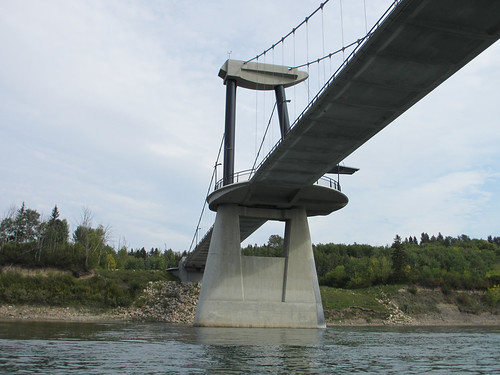 We also had a great vantage point of the End of the World attraction in Belgravia. I’m not sure if it is normally that busy on a Saturday afternoon, or if the traffic was related to the recent media attention because of a survey the City is conducting on how to make changes to improve the safety of the site. 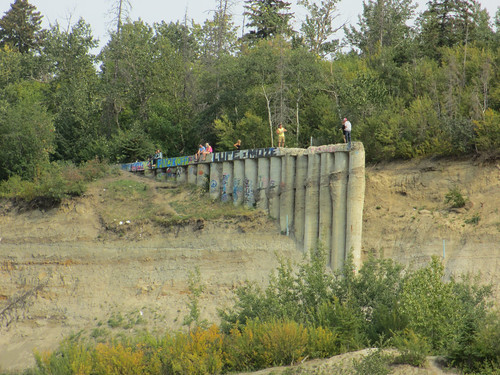 The End of the World

That second half of the trip was also memorable for reasons not as positive. By then, the headwinds had picked up, and in three separate instances, were so strong we couldn’t manage paddling against the wind and ended up turned the wrong way. Thankfully Mack has more canoeing experience, but it was a challenge to finish that last leg.

In some ways, the winds were a reason why the nonchalant greeting of the Edmonton Canoe staff we met at Emily Murphy Park was so bewildering. Given it seemed that most folks who would choose a service like this are novices, I figured there would be some concern on their part about our wind-swept journey. But as mentioned before, they didn’t even bother to check us off a list, so it shouldn’t have been much of a surprise. 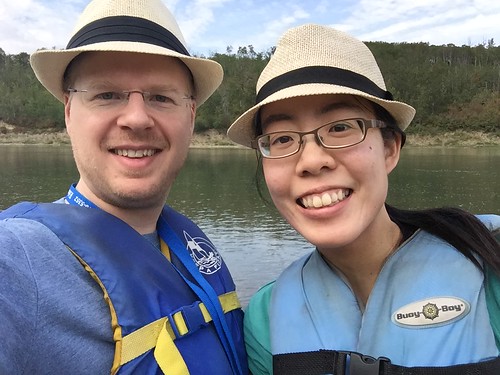 Canoeheads is the other company offering transportation/rentals, and the trip would be slightly shorter, at Laurier Park. Edmonton Canoe does offer a shorter trip of its own, from Emily Murphy to Capilano Park, which Mack and I will consider on a day with no forecasted wind!

As a whole, while we’re glad we finally experienced the view of our city from the North Saskatchewan, and appreciate the convenience provided by Edmonton Canoe, we felt like it was a bit of a missed opportunity to provide a bit more awareness about our river valley and its history, sights and landmarks.