After breakfast, we started off our second day at Christmas in November with Edgar Gutierrez and Dani Braun, two of the three men behind Edmonton’s Tres Carnales and Rostizado. They shared their holiday traditions with the crowd, as a means of providing Mexican-inspired Christmas ideas. 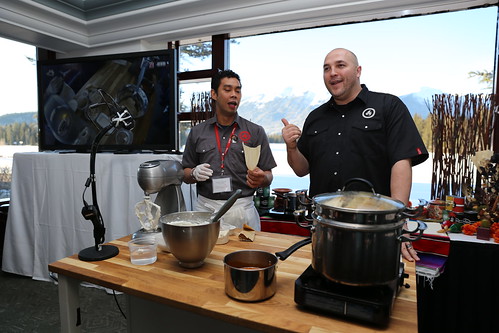 Las Posadas is a nine-day celebration observed in Mexico. Preceding Christmas Day, Dani explained that Las Posadas recreates the experience of Mary and Joseph being turned away. After “actors” dressed as the couple are declined at two residences, they are welcomed into a third home. At that final destination, friends, family and neighbours would then gather and enjoy food and libations, which often would include ponche de frutas (traditional Mexican fruit punch) and tamales.

The ponche de frutas was relatively simple to make, with the only complicating factor being the need to source ingredients at a Latin American supermarket (such as Tienda Latina in Edmonton). The dark ruby colour of the punch was extracted from sorrel flowers (better known as hibiscus), which was described as a more versatile ingredient than I expected – Edgar often adds the hydrated petals into marinades, blends them into vinaigrettes, or adds them into quesadilla fillings. The punch was delicious, with a flavour deeper and richer than seemed possible. Mack especially enjoyed his rum-spiked version! 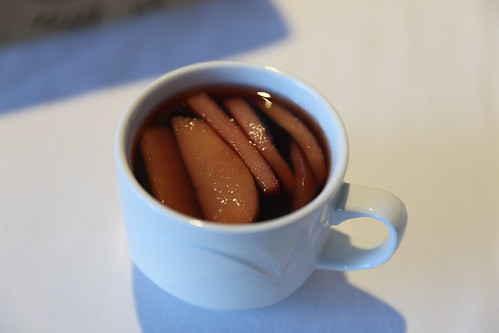 Consumed more as a snack than a meal, tamales can be sweet (filled with fruit) or savoury (filled with anything from potatoes to chickpeas or meat). Because they do take time to assemble, Dani and Edgar recommended doing so with others to make enough for the freezer – for them, tamales are a family affair!

If the process sounds daunting, not to worry – Rostizado serves them with salsa roja and queso fresco. 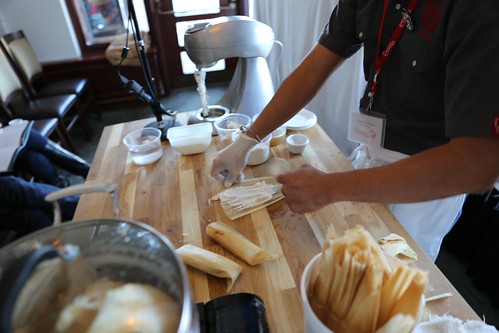 For dessert, the flan de queso was introduced as a great make-ahead dessert, intended to be served cold from the fridge. A cream cheese flan, the velvet-smooth custard was topped with a beautiful caramel, sure to wow your guests. 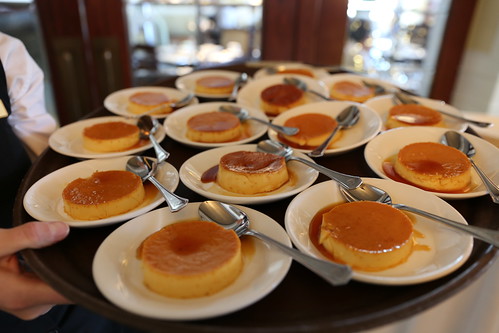 Ever the enthusiastic hosts, the hour or so with Dani and Edgar flew by. It was clear they were both passionate about their food, and were so proud to share some of their family traditions with us. It was a fun way to start off my Christmas in November experience!

There was no question I was most looking forward to seeing Chefs Anna & Michael Olson at Christmas in November. Back when the Food Network featured more cooking than competitions, I loved Anna Olson’s shows Sugar and Fresh with Anna Olson. She always made daunting dishes seem straightforward, even when they weren’t so on paper. I was hoping she was as lovely in person as she seems on TV – as it turns out, she was even sweeter (heh, heh).

I didn’t know much about her husband beforehand, but after watching Michael ham it up on stage, it’s obvious he’s the life of the party. That said, the two together would make great television, playing off one another, telling stories and exchanging bad jokes. 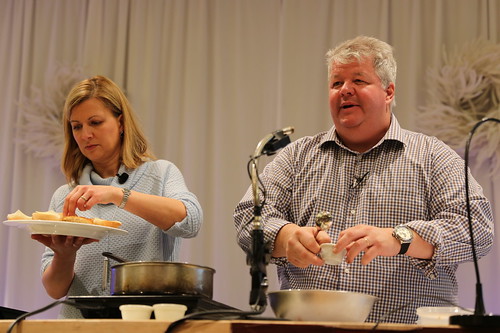 The theme of their session was a winning menu – because, as Anna mused, “Isn’t Christmas about winning and showing up your sister-in-law?” In conjunction with Alberta Pork, they had developed four recipes ideal for entertaining.

The Olson’s mini pork schnitzel sliders could easily fit on the menu of any upscale casual establishment in Edmonton. Designed as an appetizer which holds (crispy, I might add!) in a warm oven, it would be a definite crowd pleaser for adults and kids alike.

Slices of pork tenderloin were pounded, then seasoned, breaded and fried (make sure to salt and pepper the fillets directly instead of using seasoned flour, to ensure each piece is seasoned well). The schnitzels were then topped with a creamy ranch dressing (which could double as a veggie dip) and served on dinner rolls. 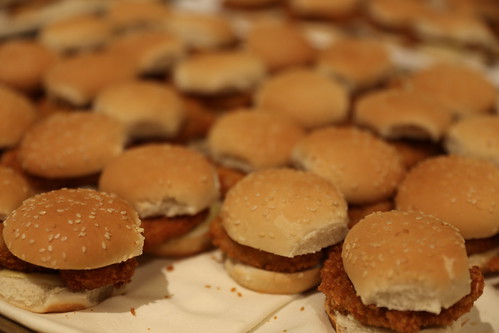 The sliders were so good, Mack ended up eating two! 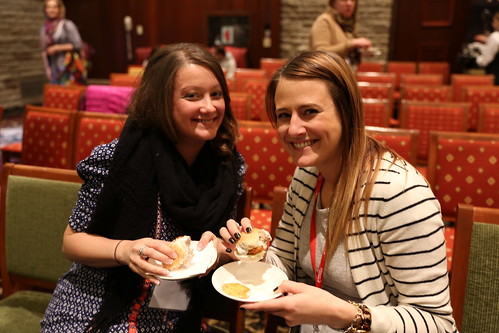 Amy and Tiffany enjoy their sliders

Next up, the three most practical tips to come from Anna’s classic tourtiere recipe were:

The tourtiere can be made ahead and reheated, which would certainly make life easier during the busy holiday season. The final product was stunning, and though I didn’t get a chance to taste it, given how approachable the recipe was, I will definitely try my hand at it this Christmas. 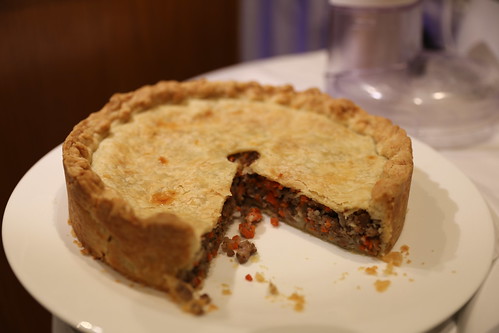 Michael’s recipe for a brie and cranberry stuffed pork loin with maple onion cream was his alternative to a more standard roast. His method of stuffing the pork was also free from twine, and instead involved making a deep cut inside the loin and spooning the cheese and cranberry mixture in the crevice.

We sampled the finished roast and enjoyed the combination of the moist pork and its creamy centre. For smaller family gatherings this would definitely work well in place of a turkey. 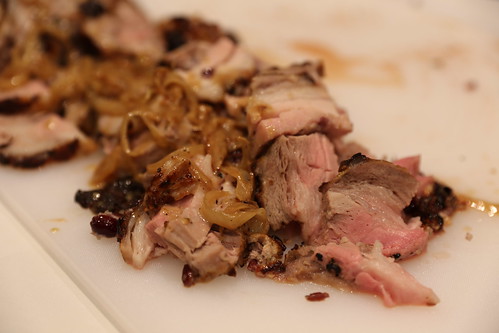 Lastly was Anna’s bacon cheddar shortbread, a recipe she developed specifically for Christmas in November (the gluten-free version substitutes a 1/2 cup of tapioca flour and 1 cup of quinoa flour for the all-purpose). I’m not the keenest baker, but given the ease in which the dough came together in the food processor, I will definitely be trying my hand at these – they would make a great hostess gift!

Anna recommended making and rolling dough in advance, saran wrapping them and labeling them with the name and temperature at which they should be baked. Then, when they’re needed (as a gift or cocktail hour treat), you could simply thaw the dough and bake them off – genius! 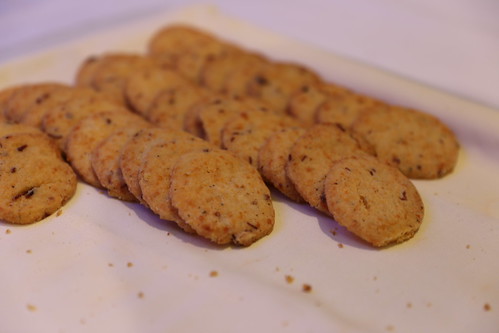 We had a great time learning and laughing with the Olsons. The couple celebrated their tenth anniversary as Christmas in November presenters this year, and I could see why they’re welcomed back again and again – their warmth and knowledge makes them great ambassadors for Canadian food. I hope they will return next year! 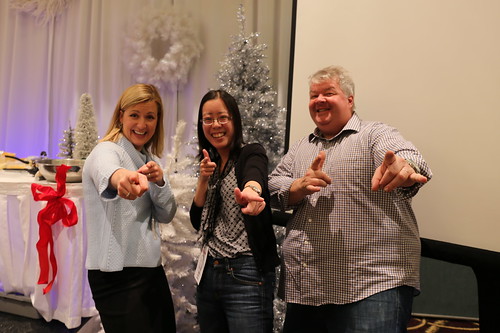 Doing “the Olson” with Anna and Michael

If the pork appetizers weren’t enough, the festive luncheon certainly did us over. Banquet meals for several hundred guests are not often executed well, but the kitchen did a fantastic job with lunch. I could have easily had a second bowl of the Twin Meadows red kuri squash soup (I loved the roasted pumpkin seeds incorporated for texture). 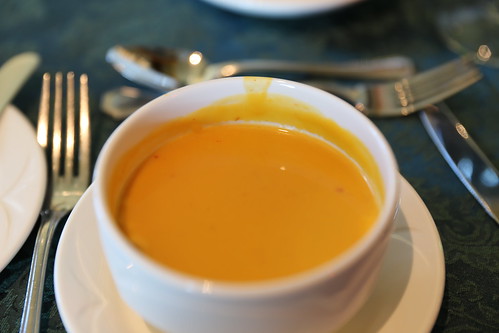 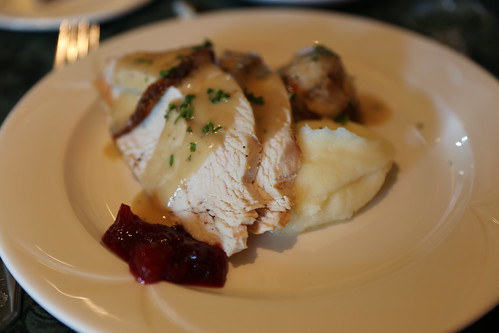 The pumpkin cheesecake was perhaps a little too deconstructed for most at our table, but was beautifully plated. 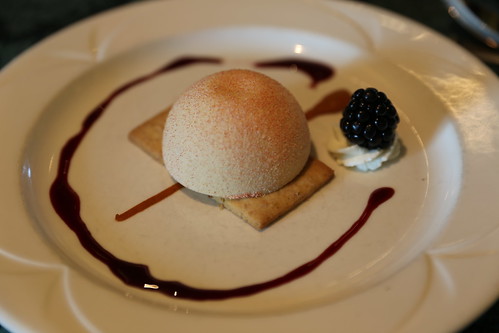 As full as we were, an afternoon nap wasn’t an option – we had several more sessions to attend before finishing up the learning portion of the day.