Mercer Tavern has been open for more than two years, but the food program has been inconsistent. Although it’s just down the street from our condo, Mercer definitely became more of a watering hole than a dinner destination for us. For that reason, when Mack and I were invited to a media dinner last week, we were both interested to see what changes have been made. 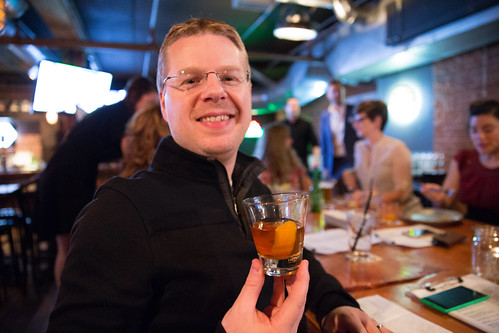 Mack with his Old Fashioned

Chef Robbie Oram, who had worked at Sage most recently in Edmonton, joined Mercer Tavern about ten months ago. Prior to that, he was the travelling chef for the Tragically Hip, and cooked at the Canadian Embassy in Beijing during the Olympics. With that experience, he has sought to elevate Mercer Tavern’s menu from the ground up. He relayed his desire to source more ingredients locally, though shared that this is a challenge in the winter months. 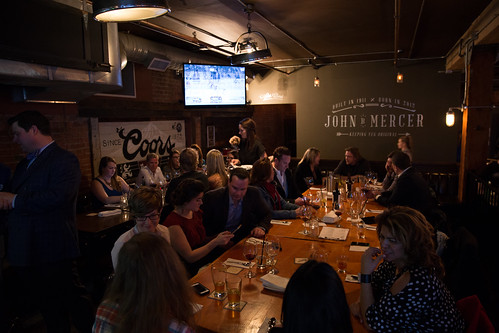 The first dish we sampled was a testament to the fact that, depending on availability, some seasonal dishes could only be served as short-term specials. The Moroccan-inspired carrot salad had been on the menu for a brief time in December, and wonderfully showcased Chef Oram’s desire to let the ingredients speak for themselves. Baby carrots from Greens, Eggs and Ham had been tossed in spices and roasted just long enough to warm through, allowing the vegetables to remain crisp. They were then topped with Reclaim Farm microgreens and served with a balancing dollop of Fairwinds Farm goat yogurt. 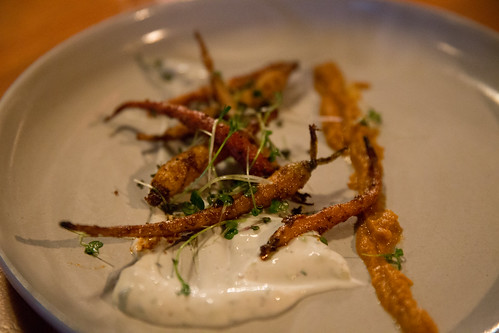 The menu also focused on comfort foods. The table couldn’t get enough of the MFC, or Mercer Fried Chicken. Brined for 24 hours, the exterior was fried to a deliciously seasoned crisp, while the meat underneath remained moist and juicy. Although it was served with a honey sriracha, most agreed the chicken didn’t need any accompaniment. 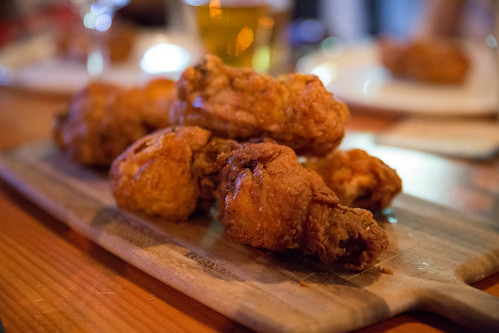 The white cheddar mac and cheese was a solid dish, though fairly basic. There was a bit of heat from Serrano chilies, and the pasta had been well sauced (something, as we’ve found in this city, is not always a given). The added texture from the toasted breadcrumbs was appreciated. 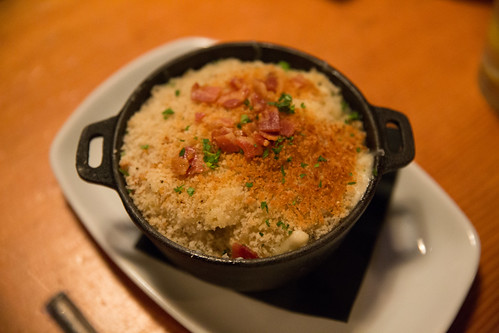 For dessert, Chef Oram brought out the liquid nitrogen to make crème fraiche ice cream as we looked on. He said the ability to instantly freeze the crème fraiche meant a smoother end product. 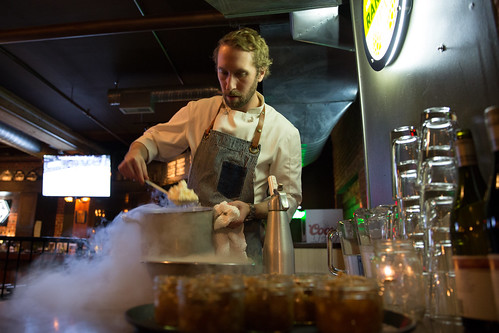 The pea-sized pellets were used to top individual mason jars of apple crumble. In many ways, it was easier to eat this form of ice cream with the crumble than more traditional scoops. 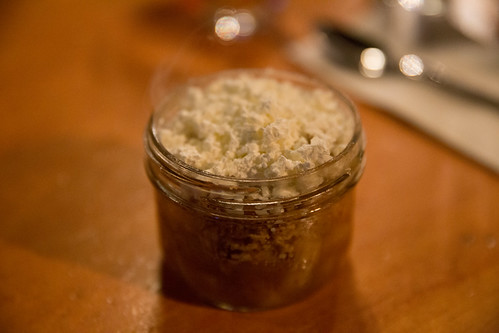 Most of the items we had that night can be found on the Mercer Tavern’s present menu, though we were told to expect more additions in the future.

The changes are promising on the menu end, and if the kitchen is able to execute these dishes with consistency, they will be well on their way to improving their reputation of what diners can expect. In warmer months, it will be interesting to see what other locally-sourced products make their way into the kitchen. Thanks again to Mercer Tavern for having us!

I’m a little embarrassed that it took me so long to step foot inside Mercer Tavern, given I walk past it every day on my way home from work, but better late than never, right? Mack and I met up for dinner there on Friday night, and I was finally able to satisfy my curiosity.

Mercer Tavern opened up in July this year, anchoring the north side of a 104 Street strip that now includes two wine bars, three pubs and two restaurants. It’s become a popular watering hole in a short period of time, but the opinion on their food has been mixed. I wanted to judge this for myself, though I will say that Mack has lowered my expectations after telling me about two of his own mediocre experiences with products from the kitchen.

After work on Friday, Mercer was hopping, with quite a number of large parties (likely colleagues celebrating the holiday season). With tons of seating nooks and the rather dim lighting, the Tavern felt like the kind of place where you could be anonymous. The space, not surprisingly, celebrates the heritage brick and hardwood of the warehouse, and as is fashionable at present, features fixtures of Edison bulbs. My favourite element of the room involves the bank of garage door windows, which in warmer seasons are raised. My only quibble was with the television screens, which I felt weren’t necessary, and cheapened the place somewhat (Mercer doesn’t have the feel or desire to be a sports bar).

I liked the dual nature of the cocktail list, highlighting both vintage and modern drinks (like Edison bulbs, seems to be de rigeur in Edmonton right now). The Uptown Fizz ($10) was delicious, a heightened take on a gin and tonic with the addition of rosemary cinnamon simple syrup and lemon juice. Mack also appreciated that local beers were on special on the prominent Friday menu, with Alley Kat and Yellowhead draft pints on for $4.25.

The food menu, on the other hand, wasn’t as creative or unique enough for me to consider Mercer Tavern a gastropub, but I was impressed to see a section of the menu dedicated to vegan entrees. I ordered the fish sandwich ($15.50), which arrived with a heaping serving of crispy hot French fries. The fish itself was tasty enough, breaded with panko, and the brioche bun was nicely toasted, but the base of plain iceberg lettuce did remind me of a certain fast food chain’s Filet O’ Fish. Condiment wise, the sandwich was dressed with a tomato relish and a lemon remoulade – the heat level in one or the other overpowered the fish.

Mack’s halibut and chips ($20) turned out to be the best meal he’d had at Mercer – perhaps the kitchen’s consistency is dependent upon the menu item chosen? The fish was light and crispy, and the fries hot and fresh. He did wonder a bit as to why the dish was served on a board – it made the coleslaw especially a bit awkward to eat.

Service, especially given how busy it was that night, was prompt. Our food was delivered in a very timely fashion, and we were never left waiting for our order to be taken, or our bill to be served. Overall, I thought it was a great place to kick off the weekend, and I would definitely consider coming back for drinks or a bite to eat.