It’s been a tradition over the last number of years that Mack and I take Grandma Male to high tea at Christmas. As a result, we’ve been able to sample our way through most of the high teas available in the city, ranging from the opulent experience at the Hotel Macdonald to more quaint settings such as Reinette Café in Mill Woods. I had only recently heard about the high tea at The Art of Cake, held on certain Sundays each month. With a few dates in December to choose from, we made a reservation for the four of us a couple of weeks ago.

We had been running a little behind, and it turned out we were the last party to be seated (the staff had graciously included a high chair at our table). It was a full house that afternoon; clearly the word has gotten around about their high tea! Much to Emily’s delight (she loves music), our table was situated next to a guitarist who added to the pleasant atmosphere. 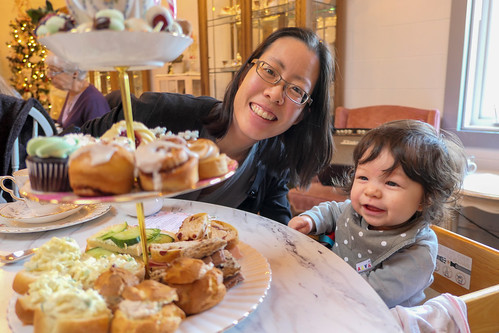 I had only been to The Art of Cake once before, ducking in to pick up some baked goods, so hadn’t before taken the time to survey the interior. It’s a lovely space, with high ceilings and numerous chandeliers beckoning the eye upward. I liked the natural light and the cozy vibe imparted by the wood furnishings and dining sets that are charmingly not uniform. 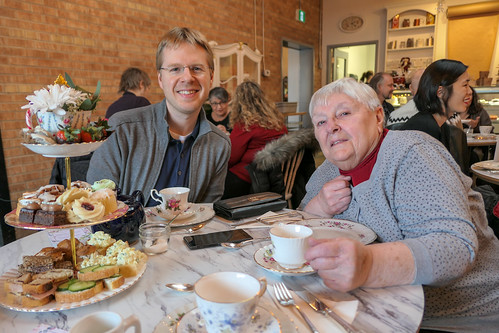 Moments after we were settled, we were provided with a pot of crème de Earl Grey tea. While I appreciate the pomp and circumstance of the choice of tea in some cases (the presentation of the tea box at the Hotel Macdonald, for instance), it is much more efficient when tea is simply set. It was also an unexpected bonus that the tea was pre-steeped in the kitchen so we could simply enjoy refills without having to wait for the leaves to steep in our tabletop pot. 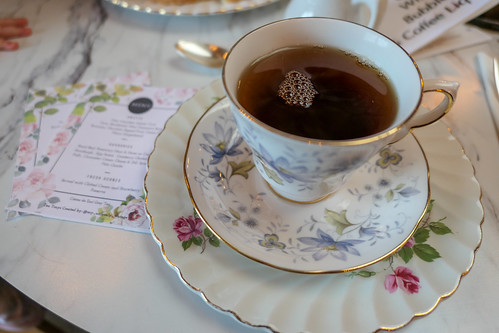 A few minutes later, staff descended from the kitchen and started serving all tables in rapid succession. The presentation of the tiered tray (created by My Uniquely Vintage), plates of mini quiches, and scones rivals any high tea I’ve been to in the city. It was also a lovely touch that menu cards were left on the table so we could easily reference each item. 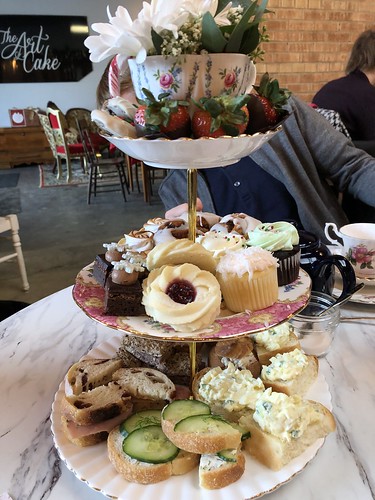 We found there to be a great variety of savoury and sweet items. The spinach and feta quiche and cranberry chicken salad puffs were a favourite on the savoury side, and Grandma Male enjoyed the festive gingerbread men-shaped scones (served, of course, with clotted cream and strawberry preserves). 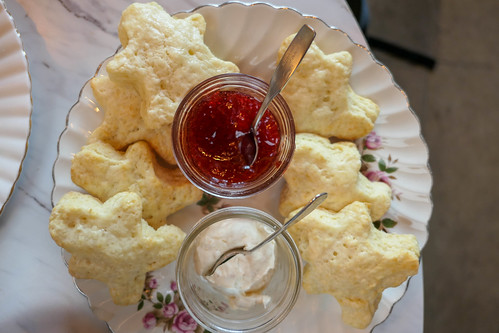 For dessert, Mack liked the flavour and texture of the gingersnaps, while I marveled at how much the cream cheese mints reminded me of After Eights. And though cupcakes are not a typical high tea item, I’m a sucker for them, so I loved that they were included here. At $45, The Art of Cake falls in the middle price range of available high teas, but we thought it to be of good value overall.

Service was amazing; tea refills were provided quickly, and because the food was delivered so expediently, we found we could really take our time to work through the treats.

I would highly recommend high tea at The Art of Cake – with a picturesque setting, good food, and excellent hospitality, it was the best high tea we’ve been to in recent memory.

Cally’s Teas is Grandma Male’s favourite place to purchase tea in the city, but since moving to their expanded digs on Whyte Avenue, they have been able to sell much more than just tea. With a kitchen, Cally’s is now equipped to sell baked goods, and even better, offer a full lunch service, including the option of high tea! Mack, Thom and I took Grandma Male to Cally’s just before Christmas to give their expanded menu a try.

The shop itself is charming, shelves brimming with lovely handmade gifts (we spotted Veekee Workshop’s tea towels, for instance), and of course, their show stopping wall of teas. The dining area takes its place at the rear of the shop, anchored by a counter that resembled a wet bar for tea. Because there isn’t a distinct break between the shop and the dining space, we weren’t sure if it would be a bit awkward holding a conversation while those around us browsed for last-minute Christmas gifts, but it turned out we needn’t have worried. With seating comprised of mismatched vintage furniture, it felt a bit like we were having lunch in a friend’s warm and funky kitchen.

I will say that it was a bit odd that we weren’t actually given a menu to peruse after we were seated, but instead were asked as we were removing our winter gear which of the two afternoon tea options we wanted to choose. Given this was our first time, we would have appreciated some time to acquaint ourselves with the menu, but perhaps the staff were just cognizant of time and wanted to ensure the kitchen was prepared to expedite our order. Based on the recommendation of the server, we opted for the $25/person high tea option, which added a savoury quiche or bread pudding to round out the small bites and scones offered through the $20/person afternoon tea. Though we did enjoy our experience, it is worth noting that we did think it was a bit on the pricey side, given our bill registered over $100.

We started off the meal by each choosing a tea from the aforementioned tea wall. A server was available to provide guidance, helpful given the overwhelming number of choices. Grandma Male decided on Formosa oolong, while I stuck with a traditional earl grey, and Mack and Thom shared a pot of seasonal egg nog tea.

Perusing the “Great Wall of Tea”

As expected, the china at Cally’s is absolutely beautiful, radiant pieces almost too pretty to use. The tiered servers were dainty but functional, a sturdy handle at the top more than capable of supporting the buttery heft at each level.

My gorgeous and festive tea cup

As we nibbled our way through the food, we were reminded of how social high tea is, because of the sharing (and passing) of communal trays of small bites.

The homemade crackers with goat cheese were a hit around the table, the mild spread melding nicely with its buttery base. Mack and I aren’t usual fans of cucumber sandwiches, but Cally’s version featured the inclusion of fragrant lemon zest, which added a zip of freshness to the tea staple. The quiche was meant to be a savoury item, but it could have almost passed for dessert – the onions had been caramelized into submission, while the tomato added another layer of sweetness. The pastry was also very well prepared, crispy and flaky.

Without a doubt, the scones were the standout. Oh so buttery and slightly sweet, they were consumed as a dessert, served with jam and whipped cream. We were all plum full by this time, but didn’t let the last few bites of scone go to waste. Mack and I agreed that we would be back for these. The dessert tray also featured some tea-studded shortbread cookies. We packed them up for later, and enjoyed them at home. The tea aroma was noticeable on the nose, but less so on the palate.

Service throughout our meal was quite attentive, though we probably interacted with four different staff/servers that afternoon. In that way it felt a little less formal than high tea services at other establishments in Edmonton, which suited us just fine.

If you’re looking for a different kind of lunch experience, or, just feel like nibbling your way through an afternoon, I’d highly recommend high tea at Cally’s!