Back in July, Mack and I were invited to join a Food Bike Tour. In their second year, the local company “strives to promote local people, places and products through healthy living”, merging a love of cycling and food. Each tour is unique, with stops at 4-6 locations. Tickets are $99 each, and cover all of the food and drink provided over the course of the 6 hour tour. Attendees are encouraged to bring their own bike, though we ended up renting through their partner, River Valley Adventure Company, at a discounted rate of $40 per bike for the day.

We met the rest of our tour group at Ezio Farone Park that Saturday morning. Collectively, we numbered around 40 participants, more than enough to comprise a critical mass to lend confidence to less experienced road cyclists like myself. 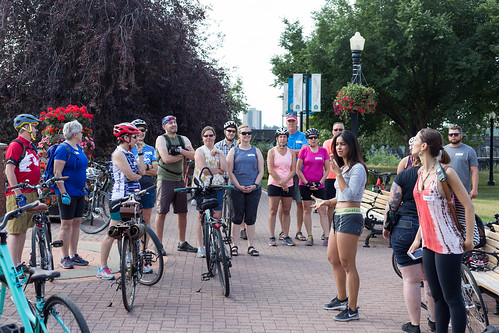 Vanessa kicks off the tour

Food Bike Tour owner and tour leader Vanessa Ojeda was full of energy as she welcomed the group and provided an overview of the day. We’d all received an e-mail outlining the itinerary in advance, but we were also introduced to the three other guides who would be along for the ride, ready and able to help with bike fixes or first aid needs.

Our first leg took us through some of the river valley trails and up to High Street, where we stopped for some cheese education at Paddy’s Cheese. Fern Janzen has owned Paddy’s since 2001, and shared some of her wisdom with us:

Fern shared that although truffled cheeses were once the most expensive product she stocked, it’s now the burrata, a fresh cheese that must be sold within two weeks. 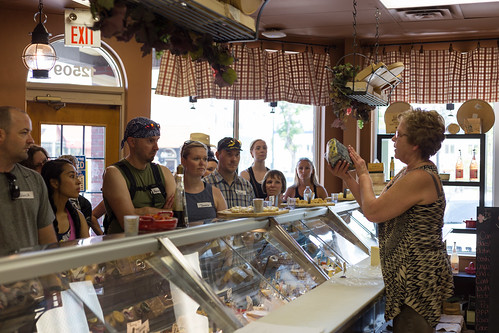 Before departing, Fern offered us several samples of cheese. Mack’s favourite was the wookey hole cheddar, a cave aged farmstand cheese from the UK.

We pedaled back downtown for our only full meal at Grandin Fish and Chips. We were given the freedom to select anything off the menu, though everyone stuck to the restaurant’s namesake dish. 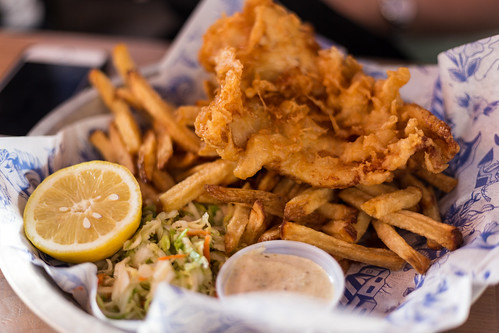 Haddock and chips at Grandin

Chef Jesse Morrison-Gauthier was cooking behind the counter, and curiously didn’t address the crowd. It would have been nice to hear from him firsthand, particularly about the fresh products they’ve sourced from Effing Seafoods and Fin’s.

After the delicious but heavy meal, it was nice to get back on the bike and work it off. We rode to Cafe Sorrentino’s on 107 Avenue. At each of the stops, Food Bike Tour staff made sure those without locks would have their bikes chained together, something Mack and I appreciated for the convenience of not having to lock up our bikes individually.

Inside, Chris Hrynyk, the Assistant Corporate Chef with Sorrentino’s, led us through a condensed cooking assembly lesson. The location hosts a number of different cooking classes for kids, adults, and team building. Our group prepared (and enjoyed) arancini and bacon-wrapped figs. 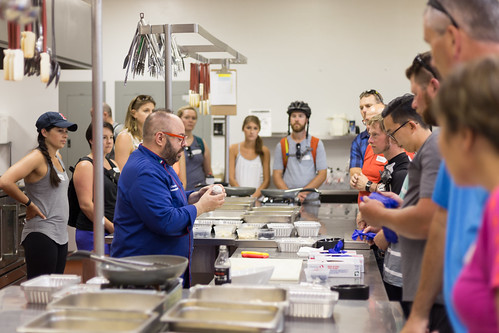 A lesson in arancini

Around us, staff were busy preparing meals for various airlines – I wasn’t aware that Sorrentino’s supplied the pre-packaged boxes sold on some Sunwing and WestJet flights. 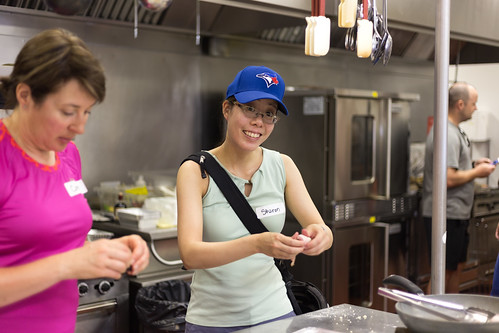 By the time we departed for our next stop, temperatures were peaking at 31 degrees. Not being an avid cyclist really made the next leg challenging for me, particularly in the heat. The route took us through the lovely Mill Creek Ravine trails, so I was grateful for the shade, but in all honesty I probably could have used a rest break in between.

The itinerary had originally called for a stop at Cafe Bicyclette, but a private booking there meant we skipped straight to The Wired Cup in Strathearn. 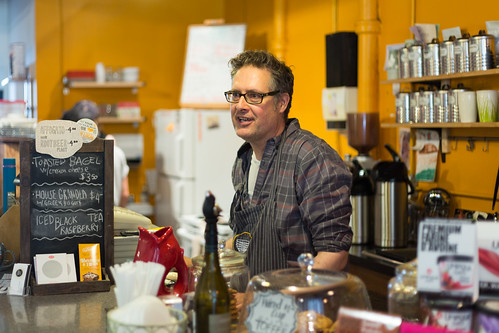 Dave Jackson of The Wired Cup

Open for ten years, the neighbourhood coffee shop makes their own muffins, granola, and bread for their sandwiches. We sampled some of the housemade granola, iced coffee, and iced tea while perusing the items in the gift shop.

We biked back across the river to Parlour on Capital Boulevard. General Manager Steve Roy took us through the history of the 111 year old building (warehouse, car garage, casino/gentleman’s club, coffee house, and hair salon) before treating the group to a tasting of three of their draught wines. I appreciated that two of the three wines they served were Canadian, including a personal favourite, the Red Rooster pinot gris. 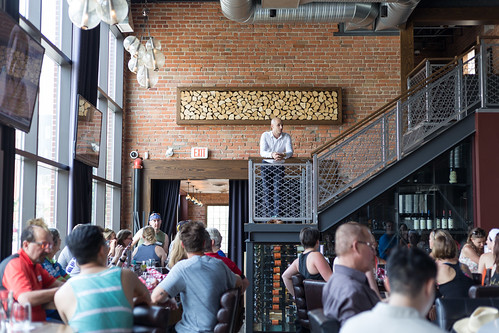 Our final restaurant was close to home – the newly-opened Bottega on 104 Street. Neither Mack or I had been yet, so it was a great opportunity to sample some of their fare. 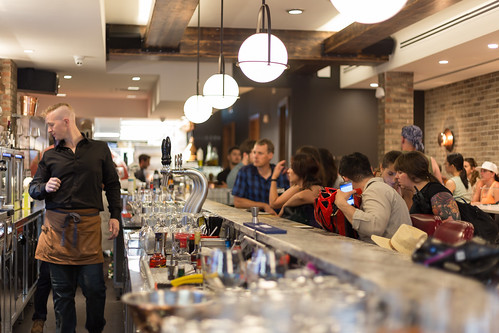 The scene at Bottega

The restaurant prepared several of their pastas and pizzas for the group to taste – we all must have been pretty hungry by that point, as the food disappeared quickly from the buffet table! 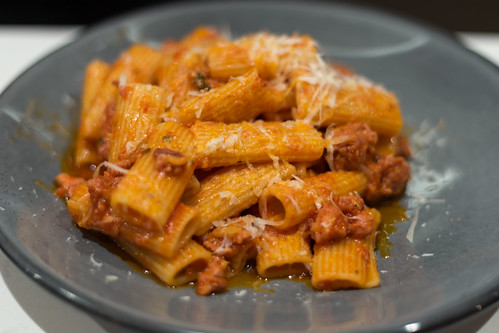 One of my favourites that night – rigatoni abruzzi

Many people decided to linger, purchasing drinks or other dishes to round out the day. We unfortunately had to return our bikes before the rental office closed, so we couldn’t stay. Our parting gift from the tour was a bag with snacks, water, and some valuable incentives to return to the businesses we visited that day, including a free pizza voucher from Parlour, a $10 gift card from Grandin Fish & Chips, and a 2 for 1 coffee at the Wired Cup. Vanessa also provided each of us with a Food Bike Tour passport; we had received a stamp at each stop along the way. If we attended future tours and collected a total of 30 stamps, we would be eligible for a $50 gift certificate from one of the tour restaurants.

One of my favourite aspects of the tour was the diversity of the businesses we visited, and the hands-on activities that were incorporated. It was neat to taste, learn, and cook our way through the city!

Most of the businesses are compensated for their participation, but in the process hope to expose their business to a new crowd.  The attendees we talked to had a great time and were very open to learning about new dining options, so while it seemed to have a positive affect, only time will tell if the tour will result in return visits.

The length was also an obvious challenge for me in terms of time commitment and fitness level required, as we ended up cycling nearly 30km that day. When asked, it appears their target demographic are avid cyclists, so the distance wouldn’t be such a barrier for this group. Still, if Food Bike Tours hopes to expand their reach in the future, they may want to consider half day tours on evenings or weekends that remain on one side of the river. It would be a nice teaser for those less comfortable with urban cycling as well.

Overall, I commend Food Bike Tours on encouraging alternative transportation modes to explore Edmonton. Vanessa’s passion for food and fitness is obvious, and she is helping to expose some local gems to a wider audience. Thanks again for having us!

Food Bike Tours runs until September – their last tours this year take place on September 9 and 16, 2017.