It was an odd evening, heading to the airport with Mack two weeks ago without the intention of travel, or the purpose of picking up or seeing someone off. Instead, we were at the Edmonton International Airport for a unique progressive dinner experience, for a taste of what we might have to look forward to prior to a flight.

The EIA has repositioned its marketing to encourage travellers to arrive earlier than the recommended time so that their vacation can “begin at the airport”. With over 60 shops and restaurants, the EIA has definitely increased its retail and hospitality brands over the last few years, offering more variety than ever before. They even have developed a free-to-join EIA Rewards program that will offer monthly discounts from partner businesses. That night, we were able to sample fare from three of its restaurants.

Our first stop was Houston Steak & Ribs, located just past security and one that I’ve passed by countless times (usually during my beeline to the Starbucks across the hall). It’s the only location in Western Canada, and staff boast that the restaurant has the best views in the airport, given it faces some of the runways. Licensed 24 hours a day (though only open from 6am-10pm), it enables travellers to indulge with an alcoholic beverage with breakfast if desired. 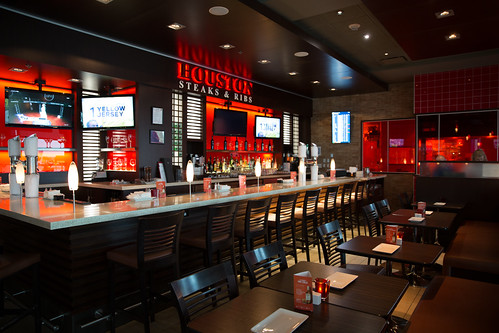 Their lunch/dinner menu is surprisingly compact, with just a handful of burgers, sandwiches, their namesake ribs, and appetizers on offer. We sampled three of the latter: warm goat cheese ($13), crab cakes ($18) and beef sliders ($13).

The goat cheese was a pleasant surprise, decoratively layered on top of spinach and dried apricots and pistachio couscous. Our only complaint was how few crostini were provided. 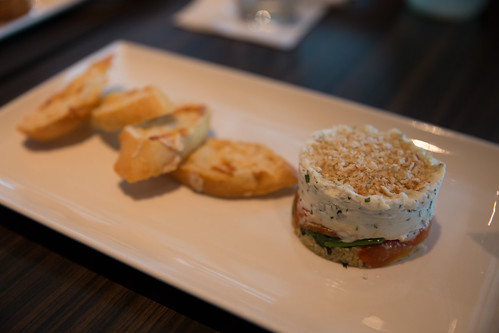 The crab cakes were my least favourite dish, as I found them to be overwhelmed by the dill dressing and an unfortunately overdressed arugula, tomato and red onion salad. 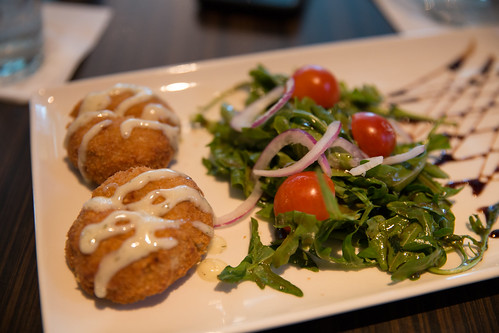 The beef sliders were definitely the most value-driven, accompanied by a generous portion of perfectly crispy sweet potato fries. 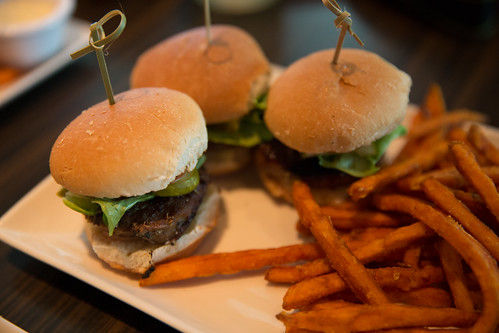 We also had cocktails to start. My Purple Haze ($9.99) was a fun way to begin the evening, a sweet concoction of vodka, blue curacao, white cranberry juice and grenadine. 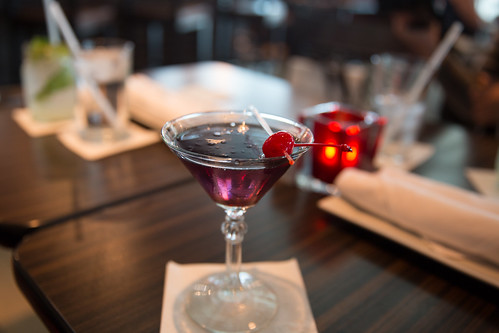 Overall, I had a positive reception of Houston’s, and would definitely not overlook the restaurant on future trips to the airport.

Belgian Beer Café, our second stop, has the fortune of being situated next to EIA’s beautiful living wall. Greenery is sparse at the airport, and in the winter, the natural cascade of leaves is especially inviting. 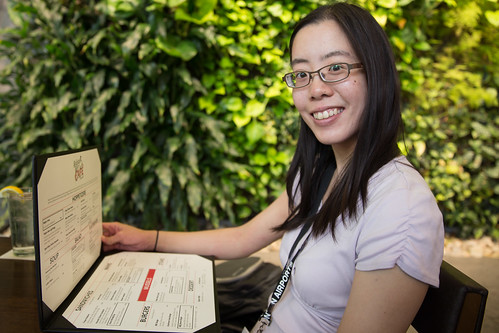 By the living wall!

The restaurant interior is meant to evoke 1930’s Belgium, with imported millwork and décor setting the scene. Like Houston’s, Belgian Beer Cafe is also licensed to serve alcohol all day. In addition to an extensive beer menu (with over 40 different Belgian bottles, on top of domestic offerings), the food menu captures both classic Belgian tastes as well as what staff described as “modern Canadian” dishes. 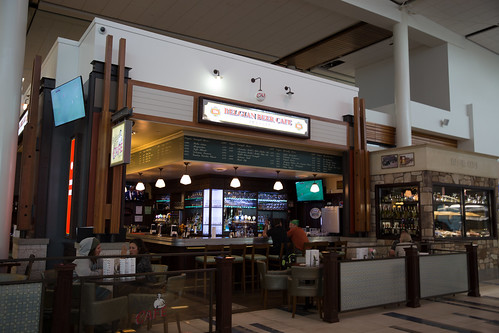 Mack and I ordered from both ends of the spectrum. His white wine and garlic mussels ($14.50) was the more successful of the dishes. The portion was substantial (and we were hoping not exaggerated given we were on a food tour), and Mack enjoyed the flavour of the sauce. 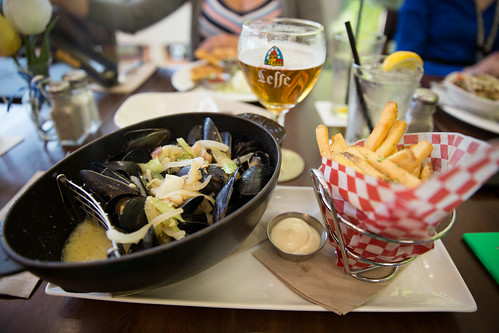 My beer battered fish and frites ($17.99) was disappointing. The coating was too heavy, concealing cod that tasted less than fresh. The fries, weighed down by the fish, ended up not retaining their crispy, double-fried exterior – perhaps a plating change-up could be considered. 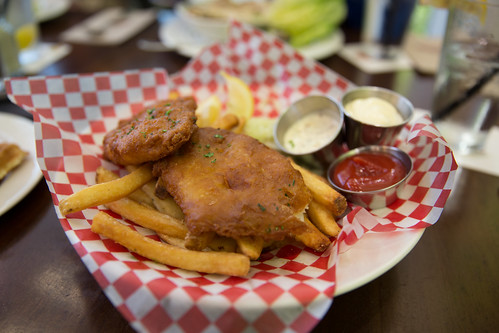 For dessert that night, we headed back towards security to Cookies By George. This stop was perhaps the most insightful for us, as it cleared up a lot of misconceptions we had about the company (and one that I visited religiously for coffee in my university years; I must have consumed my weight in flavoured creamers).

A Canadian company, Cookies by George began in 1983 in Vancouver. Fifteen years ago, an Edmontonian was so wowed by the product that he decided to buy the company, and moved the headquarters to his hometown. 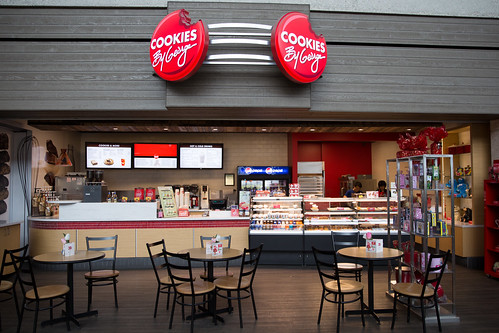 They have eleven locations as far east as Winnipeg, but have continued to use the same recipes and methods from its inception: small batches made from all natural ingredients, using no preservatives. The cookie dough is all made from scratch in Edmonton, frozen and shipped to its stores, then hand scooped and baked fresh every day. Its best-selling cookie today is their milk chocolate chunk.

The EIA shop is the only airport branch of Cookies by George, and is only one of two in Edmonton to serve soft ice cream (West Edmonton Mall is the other). Three locations in Edmonton also stock locally-made yogurt by Bles Wold. 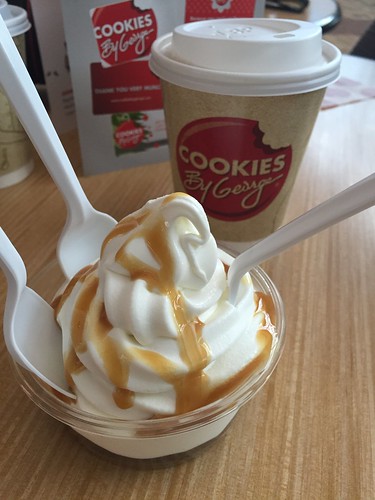 Part of the reason our time at Cookies by George was so delightful can be attributed to its energetic ambassador, Faye Mowers, the VP and Director of Operations. She shared that after she was hired by the company while in university, reading the employee manual was a “spiritual experience”. She has worked for the company ever since.

Besides takeaway customers, Cookies by George does significant business shipping their cookies across Canada and the U.S. (though they have shipped as far as Japan before). For fun, they were getting ready to ship cookies to Prince George of Cambridge for his second birthday (“From one George to another”). 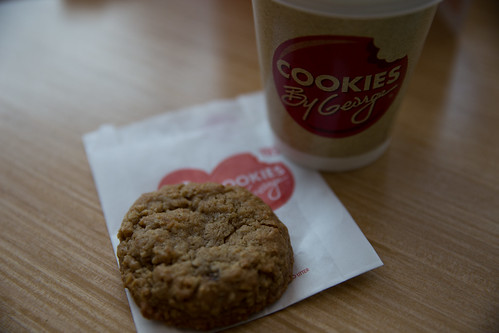 Because of their sales at this location to passengers about to board planes, they developed a sturdy carry box to keep the precious cargo safe. We were fortunate to take home a baker’s dozen each.

Thanks to Jacquie and Gillian and the Edmonton International Airport for hosting us that evening!